Exactly one week after the powerful UFC 277 that graced the American Airlines Arena in Dallas, another UFC Fight Night Vegas event will take place in Las Vegas, featuring a featherweight main event between Thiago Santos and Jamal Hill, with the second main card fight being Vicente Luque versus Jeff Neal. In addition to the fights among the ranked fighters, we will be treated to two fights in The Ultimate Fighter, one of which is Mohammed Usman vs. Zach Pauga.

All main card fights and the most interesting confrontations in the UFC Vegas 59 prelims will be presented in the review.

You will be able to watch a free live fight on the night of August 6 to 7 at 1ufc.net. To watch all the fights online, simply go to the site, open the UFC Fight Night tournament and enjoy all the events in the octagon without registration. 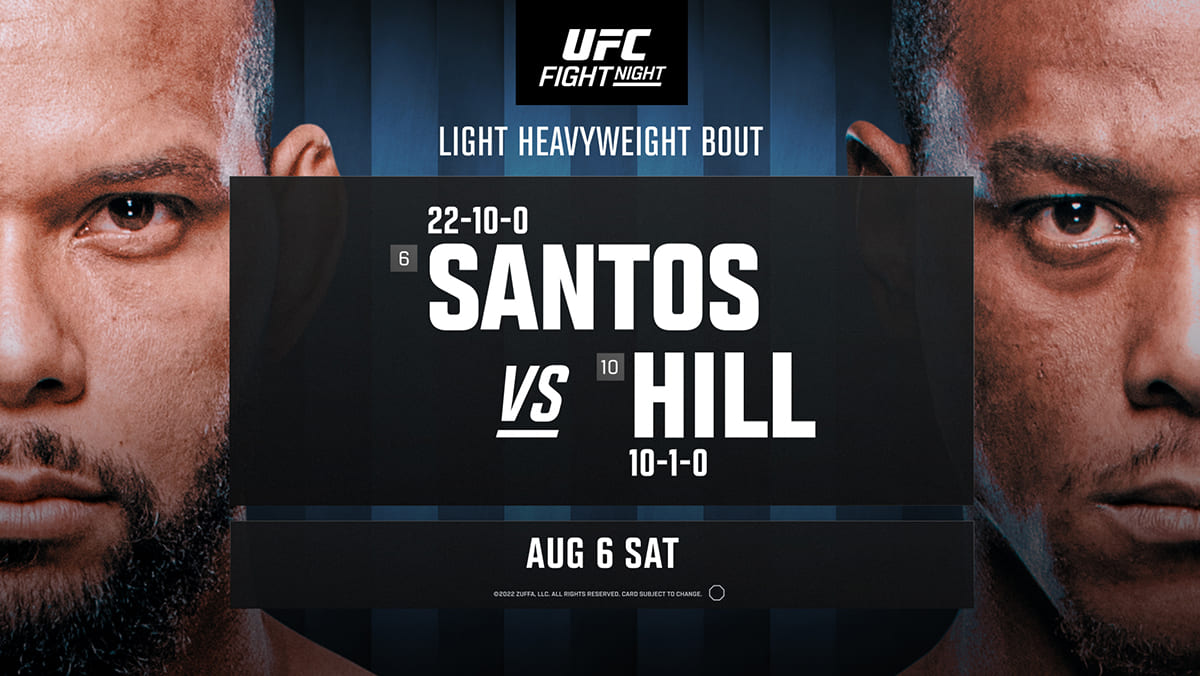 The main event of the night at the Las Vegas Arena is a fight between two top-10 ranked welterweights. The 38-year-old Brazilian veteran Thiago Santos (22-10) and the 31-year-old American Jamahall Hill (10-1) will fight in the octagon. Experts say the winner of this fight will be getting closer and closer to a title fight, but after Ancalaev’s solid win, they’ll have to wait.

Santos and Hill came to this fight in different states: the Brazilian veteran had a title fight once before at UFC 239 against the great Jon Jones, but he failed to take the bantamweight title. A knee injury ruined the veteran’s path to a return to the top of the division. Since then, the failure began: Santos lost to all the top fighters of the division, Teixeira, Rakic and in his last fight Ancalaev, but only Teixeira could choke the Brazilian in the 3rd round, the other fights ended in decisions. The only win for Santos in the last 3 years was against Johnny Walker, who is not in Top Rank right now.

Thiago Santos still wants to get back to his former position in the division, he is getting his third consecutive fight as a main eventer, and this chance could be his last.

Jamahal Hill, one of Dana White’s top Contender Series graduates, is doing much better in the division, even though he’s only ranked 10th. The 31-year-old American has an impressive 10-1 record and is clearly aiming for the top. His record includes landmark wins over St. Prue and Johnny Walker, with the last 3 wins coming by knockout. Sweet Dreams must pass former bantamweight title challengers to seriously claim the Prohazka and Teixeira division.

Hill, the master of tough knockouts, gets his second main fight of the night in a row, the first time he managed to crush Walker hard, how will it be this time? Bookmakers believe Hill is the clear favorite – but everything will be decided on August 6 in the octagon. 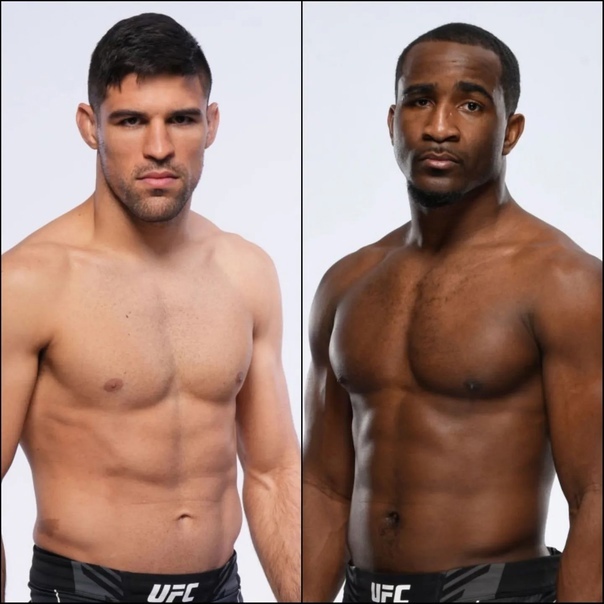 The second and final ranked fight at UFC Fight Night Vegas 59 will be between 30-year-old Brazilian Vicente Luque (21-8) and 31-year-old American Jeff Neal (14-4) in the welterweight division. The promotion’s No. 6 and No. 13 will face each other for the first time in a head-to-head bout, the winner could seriously assert himself as a real contender to fight Chimaev, Burns or Edwards.

Brazilian jiu-jitsu brown belt holder Vicente Luque is one of the most skilled fighters in the UFC, his chokes have become a real calling card for the Brazilian. He debuted in the promotion in 2015 and has since suffered only two losses: to Thompson and Edwards. Luque is eager to return after April’s loss to veteran Belal Muhammad, who was able to prevent the Brazilian from doing his signature chips. But Luque has never lost twice in a row in the promotion, always making a beautiful comeback on the winning track. The title of best fight of the night against Brian Barberena, Mike Perry and Stephen Thompson and Tyron Woodley speaks volumes. The bookmakers are also talking about his outperformance.

Fortis MMA’s Jeff Neal returned to winning ways after two straight losses, defeating Santiago Ponzinibbio by split decision at UFC 269 in December 2021. Another Dana White Contender Series alum made his promotion debut in 2018 and started out with five straight wins over Camozzi, Camacho, Muhammad, Price and Perry. But then losses by unanimous decisions to Thompson and Magny followed, which predetermined his 13th place in the division to date. A win on Ponzinibbio does not guarantee him a win against the aggressive and cunning Luque, although he has a blue belt in Brazilian jiu-jitsu and can compete with the Brazilian in straight sets.

The fight between Luque and Neal is expected to be extremely entertaining primarily because of Luque, who doesn’t like to drag out fights. 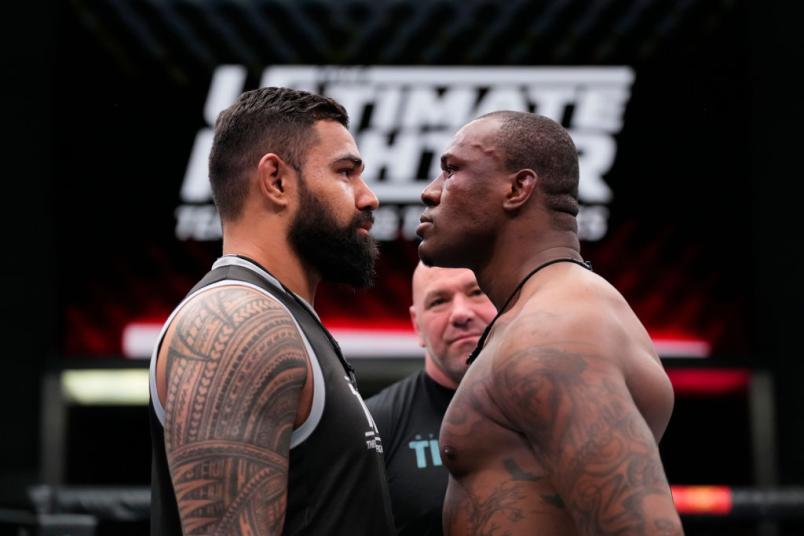 The Ultimate Fighter title bouts await viewers at the UFC Apex Arena before the fights of the ranked fighters. The last two favorites of former UFC champion Julianna Pena, who was on her team, will take to the canvas: 33-year-old Kamaru Usman’s younger brother Mohammed (6-2) versus 34-year-old Zach Pauga (6-0).

The Ultimate Fighter season 30 finale will determine the men’s and women’s champions. The men’s fight gets more attention, because it will feature the younger brother of current welterweight champion Kamaru Usman, named Mohammed. The older brother competes in the heavyweight division, but is little known to UFC fans. Before the finals at UFC Fight Night Vegas 59, he had heavy decision victories over Mitchell Sipe and Eduardo Perez. The younger brother looks like a physically gifted and intelligent fighter who is capable of making his way into the world’s premier promotion. What’s interesting is that he has judo skills in his arsenal, his first opponents were choked out by a kimura, but he’s pretty good in the standup.

His opponent in the Ultimate Fighter finals is former professional soccer player Zach Puga, even less known in the martial arts world, but still undefeated in his career. In the semifinals he confidently took on Jordan Heiderman, but at bantamweight. The Elevation Fight Team member has six undefeated wins, with a win over former UFC fighter Marcus Perez on his record.

The fight between Usman and Pauga could provide a highlight reel: Usman is clearly preferred in physical strength, but Pauga is a more agile and thin fighter. 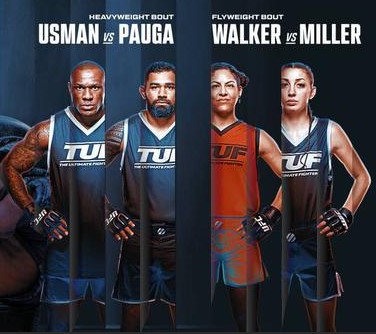 Veteran Brogan Walker was one of the favorites throughout the show due to her performances at Invicta FC. During the tournament she managed to recover from injury, survived a tough fight against Hannah Guy in the quarterfinals, and then defeated Laura Gallardo to become a finalist.

Miller, 26, also made her mark at Invicta FC and managed to avenge a loss to Claire Guthrie in the quarterfinals on her way to the finals. In the semifinals, Miller defeated Nunes’ Kaitlyn Neal in dominating style and advanced to her career main event. 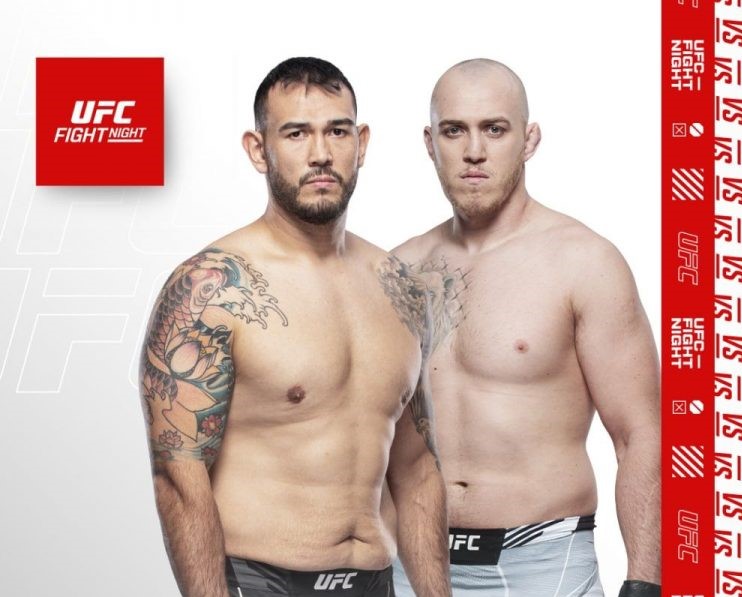 For fans from the former Soviet Union, the main fight of the evening will be a clash between 27-year-old Moldovan with Ukrainian roots Sergei Spivak (14-3) against 31-year-old Brazilian Augusto Sakai (15-4) in the heavyweight division.

August 6, Augusto Sakai is currently ranked #14 in the heavyweight division, and is in danger of dropping out of the top tier after four straight losses. After starting his UFC career with four consecutive wins, Sakai has been having a rough time lately, losing three straight fights early to Alistair Overym, Jairzinho Rosenstrike and Tai Tuivasa. Three straight losses to the top heavyweight standouts don’t look terrible, but the young Spivak needs to be beaten to get back on track. Sakai has experience of big wins, knocking out Tybura and beating Orlovsky, Ivanov and Sherman.

In September, 2021, Moldovan Sergey Spivak suffered a loss to Tom Aspinall, but in March, 2022, he knocked out Greg Hardy in the first round. The 27-year-old Moldovan has four wins in his last five fights, and he’s clearly looking to break into the top-15 of the super-competitive heavyweight division, led by Ngannou. Spivak earned his promotional debut win in 2019. He subbed the rising Tuivasa in the first round, which speaks to the promise of the young fighter by heavyweight standards. Spivak is noted by many experts, he looks very good against the veterans of the division.

Sakai is bigger and more experienced, but Spivak’s better shape certainly speaks in his favor. I wonder if the Brazilian will be able to cling to one of his last chances to stay in the top, or if “White Bear” can get another solid win in the UFC.

Two Brazilians, 28-year-old Ariana Lipsky (14-7) and 33-year-old Priscilla Cachoeira (11-4), will face each other in the women’s featherweight division. Both are coming off victories in Las Vegas and are looking to continue the momentum.

Lipsky broke her two-fight losing streak last fight at UFC Fight Night 192 with a unanimous decision victory over Mandy Bohm, but her record so far in the promotion is just 2-3. The Brazilian with Polish roots became the KSW champion and has a lot of potential, I wonder if she’ll live up to the experts’ expectations.

After defeating Gina Mazany at UFC 262, Cachoeira moved up in weight and was brutally beaten by Gillian Robertson at UFC 269, but in February 2022 at UFC Fight Night 202 she defeated Ji-Yong Kim and won the fight of the night award. “Zombie Girl” has a negative record in the UFC, as does Lipsky: 3-4, but she has three wins in her last four fights, a serious bid for the top-15 division.

One of the Lipsky-Cachoeira pairing will pick up her second win in 2022 and take a step forward in the lightest division rankings, while the other will fall back to second place.

Fans of martial arts can watch all the main card fights for free on 1ufc.net. Next we will look at the interesting fights of prelims.

The veteran Sam Alvey will meet in the middleweight bout against the promising Polish fighter Michal Oleksieczuk. The 36-year old Alvey has fought 52 fights in his career, but he has had very few truly high profile fights, with more close losses.

At UFC 272 in March, Olekseichuk snapped a two-fight winning streak with a loss to Dustin Jacoby, and his record dropped to 4-3. The 27-year-old Alvey, with a boxing background, has displayed outstanding boxing skills, particularly crisp bodywork, throughout his UFC career, but each time the Pole has failed to perform at his best in the octagon. 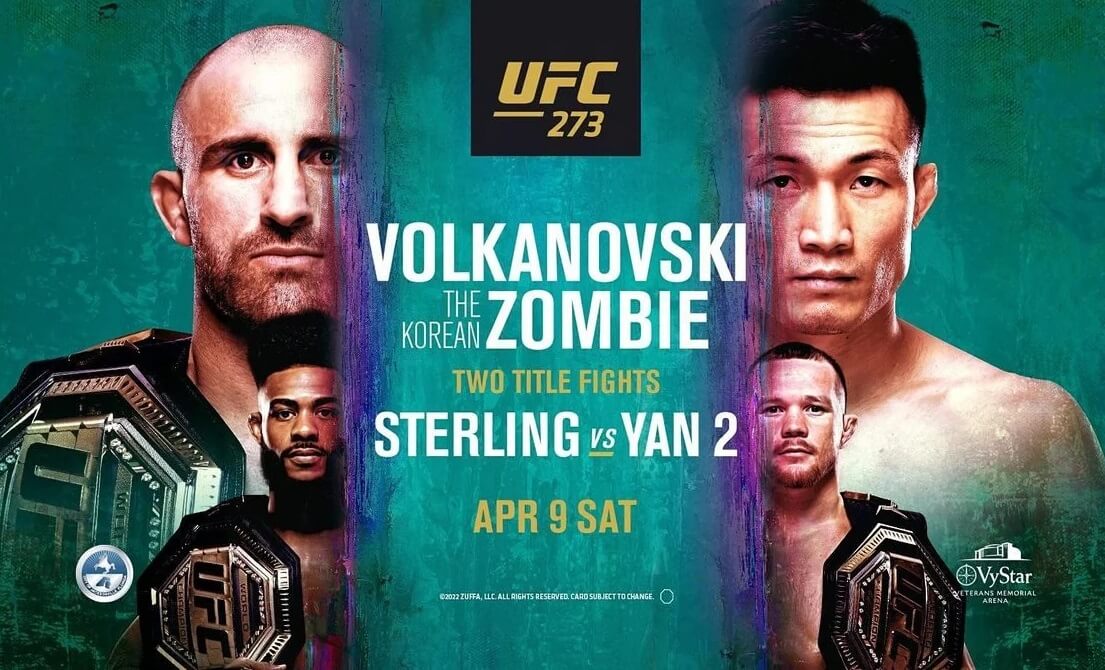 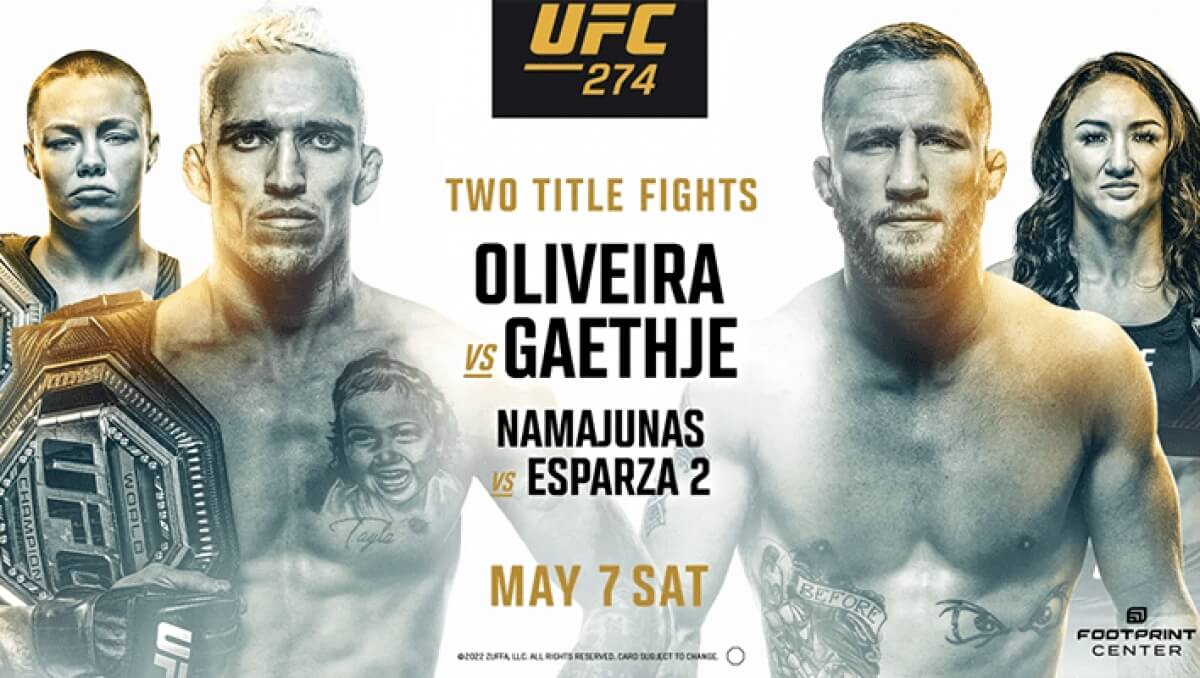